The Cedar Ridge Model UN Team distinguished themselves with an “Outstanding Delegation” school designation in a recent competition in a virtual Model UN Conference, hosted by Old Dominion University. In addition, four student delegates were awarded individually for their efforts and achievements.

Traditionally, schools from all over the northeastern United States compete in the Model UN Conferences. But as Club Advisor Frank Felicelli said, the trend is moving South, and it is very competitive.

The Model UN Team at Cedar Ridge has been active since 2008. It is a club completely run by students; they even train one another!

In conference competition, each student is assigned to a model UN committee that will deal with real world problems and issues, replicated from the real United Nations.

Usually, there are two out-of-state competitions per year, which involve debates, written resolutions, and judged performances at the conference itself.

This year, due to COVID-19, the conference was held via Zoom and breakout rooms. 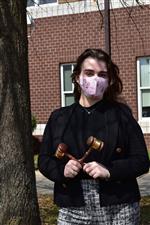 CRHS Senior Maddy Vernon has “really grown the club,” according to club advisor Frank Felicelli. She is the Club President, and has trained every club member. She also reportedly wins awards every year. But Felicelli said this year is special because she was the recipient of the coveted Model UN gavel. Maddy Vernon was named the “Best Delegate in her Committee.” This means she was in the top three of performers at the conference, and less than 1 percent of students receive this award out of the 500-800 students, which compete. Out of the masses, there are 8 to 10 committees, and only the top students on each committee receive this award.

This year is also special because Cedar Ridge High School has rarely earned a school designation, and they brought home second place in the small schools category in February 2021.

Congratulations to Maddy Vernon and the entire Model UN Team from Cedar Ridge!