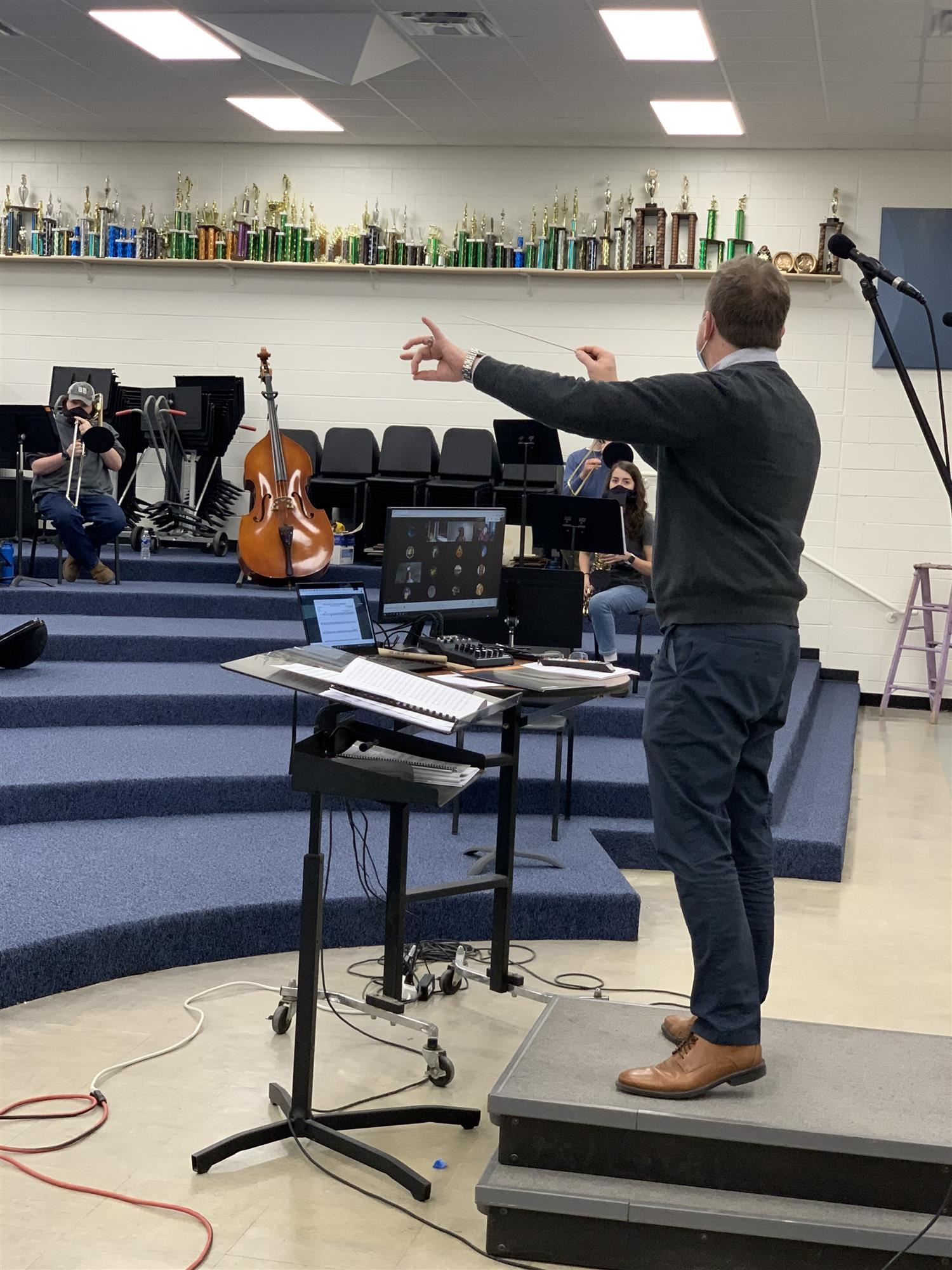 Meet the newest addition to the band/music staff in OCS!

"There is two kinds of music, the good, and the bad. I play the good kind."
-Louis Armstrong

And Mr. Aaron Noё said the "good" kind is the kind you can tap your foot to!

When Mr. Noё joined the OCS staff in August 2020 as Director of Bands for Orange High School, his goal was to try and “salvage as much band” as possible in an online platform and to create a virtual band room. “I wanted to create a band experience for students, whether they were at home or in person… Hopefully, over time, we have lessened the impact of COVID on our young musicians.”

He has done just that. In the fall, he orchestrated a virtual marching band competition and show. Since then, he has focused on concert band by utilizing a new COVID tool for musicians, called Flex arrangements. These are tailored arrangements, meant for reduced instrumentation. In other words, with this sheet music, all musical parts can be covered with fewer musicians. They are specially created for small ensembles. And he ensured that students who are remote can experience the sights and sounds with in-person performers, thanks to investing in special, high powered microphones that are strategically placed throughout the band room.

“If a student is at home with their headphones on, I tried to create for them a sound experience as if they were right here in the room,” said Noё.

Mr. Noё comes to Orange County from Fairfax, Va. He has a collective 18 years of experience on his resume, directing all kinds of bands and ensembles--from marching bands, to jazz groups wind ensembles and concert bands, mostly in middle and high school grades. He even spent time teaching the trumpet studio at the University of Mary and Washington at the collegiate level for a while. Most of his own career as a performing musician has been jazz. Most of his teaching career has been at the high school level in central Virginia. A Wilmington/eastern North Carolina native, he earned his undergraduate degree from Greensboro College and finished up a Masters of Music and Music Education from Virginia Commonwealth University.

Mr. Noё will be quick to tell you that you don’t “choose” to major in music; rather, you do it because you can’t see yourself doing anything else! His philosophy of teaching comes from his own personal experiences with how being in band creates a sense of family, as it did for him, having attended a total of three high schools when he was growing up.

As a high school freshman in Burgaw, NC, Noe said he “identified” with band right away.

When facing a move to another high school later down the road, Noё was able to meet other students prior to the start of school through summer band camps. There, he and many others would establish relationships with fellow music makers that were strong and long lasting.

As a student next attending a high school in Fairfax, Va., he was allowed to audition one evening with the director of bands, whom he said was an amazing teacher. There, he landed a seat in the top ensemble and a spot in the jazz group.

Noё said Band always allowed him to get connected to each new school through making music. For him, band was always open and accepting.

“It really brings people in, and you grow as a family,” he said. And even during a pandemic, that is exactly the family he provides for the band students at Orange High School.

Noё said that the incorporation of arts in education ties directly into teaching the whole child.

“You can teach numbers and science,” he said, “But HOW we SHOW culture and tie in the emotion of the aesthetics is accomplished via arts education. And cultural arts need to be an essential part of every child’s education.”

“Society and culture are never remembered by those numbers and the sciences, but always by the art that helps tell the story,” he added. “And music is a fundamental part of arts education.”

Mr. Noё is married to his “beautiful bride,” Rebekah. He has a schnauzer, Miles--appropriately named after jazz trumpeter Miles Davis. He also has two adult daughters: Jordan, who is a licensed stylist and tattoo artist; and Christa, who is currently a junior at Virginia Tech, majoring in… you guessed it! Music! (Wonder where that influence comes from…?)

Welcome to Orange County Schools, Mr. Aaron Noё! And thank you to you and your students for being a part of highlighting Arts in Our Schools Month in OCS, this March 2021!