“Talia On the Path of Shadows” 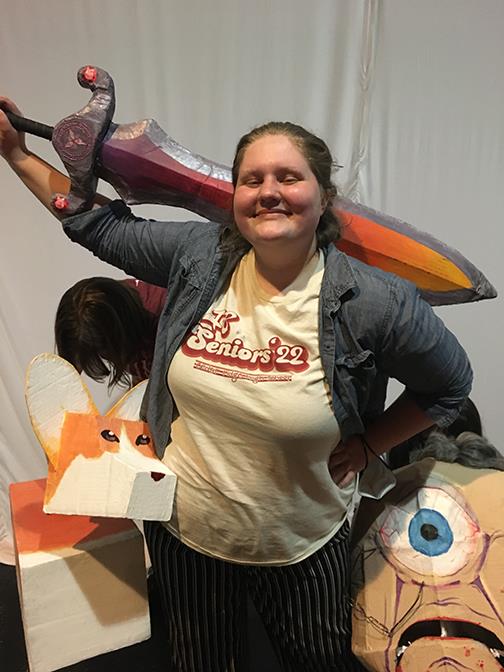 About this play and the author…

“Talia On the Path of Shadows” was named a winner of both the N.C. Young Playwrights Festival (NCTEA) and the Burning Coal Kidswrite Festival this year.

Quinn Gilbert, a senior at Cedar Ridge High School, is the talented young writer who penned this award-winning, full-length production.

“Talia On the Path of Shadows” received a staged reading at UNC-Greensboro, where Quinn was able to see college and graduate students there read and portray the characters and the scenes. Quinn’s play, along with the others from the state competition, will be published and made available for high schools everywhere to perform. Quinn will also receive a royalty fee each time the playbook is purchased. So, all the hard work literally paid off!

Mr. Evan Mitchell, theatre teacher at Cedar Ridge High School said, “I’m sincerely happy for Quinn. She’s such a gifted student! For her and for all of her class, high school has not been easy—especially with all of the heavy things going on in the world. I am happy and proud that she had this, and that she put in all the work and time. And I am thrilled for the play to be lauded and to receive all the awards it deserves.”

Hear from Quinn below on some key parts of the process…
Q&A with Quinn Gilbert:

When did your love of writing begin?

Even going back to elementary school, I’ve always really loved to read. And reading inspired me to write. I thought, “This is so amazing! I wonder if I could do it too.” I had never really thought about playwriting until sophomore year.

We had a 24-hour playwriting festival, where you had to write a play, direct it, have the actors memorize and perform it within 24 hours. It was just a fun little thing we did afterschool one day. The Cedar Ridge and Orange High theater teachers thought of it. This was the first one I ever wrote. It was called, “Light” and it was about life and death and love, in Greek Mythology.

What do you most enjoy writing about?

As I started writing, I realized I really love write about relationships—whether that be, like in “Talia,”–Parent and child, or in the first play—love and loss. But I also love high fantasy pieces, so I really want to include a lot of that as well.

What is “Talia On the Path of Shadows” about?

Most people I talk to have said they think of Talia as being somewhere between the ages of 8 and 15. Probably anywhere in grades 8-10—not an adult, but not a child. Someone described it [the play] as escapism. This fantasy world was a way for her to escape some pretty upsetting things in her life.

I think it’s never clearly stated why he left, and I wanted to leave that up for interpretation. I think one of the ending lines is, “Sometimes people grow apart. There are relationships that can’t be fixed, and there is love that cannot last.” In my head at least, there wasn’t a connection, and they just couldn’t make it work.

There’s something relatable about the piece in the sense that it’s a young person trying to make their way through the world, and friends and family, and trying to figure out what that all means to them.

What theater courses are you enrolled in at CRHS?

What would you say to someone who is going to see the play for the first time?

There are going to be parts you laugh at until you cry, and other parts where you cry until you laugh. It’s an incredibly fun show and it’s very relatable in some aspects. There’s something in it for everybody. The cast has done an incredible job with putting everything together. If you don’t want to see it just because it won awards, come see it to support Orange County students. This amazing cast has brought it to life, otherwise it would just be words on paper.

Do you plan to continue to write plays?

I would love to just be able to write plays and do nothing else. But I have to make money. So, I plan to go to UNC-G and double major in history and theatre. I’m not sure how many playwriting classes they have, but I would like to take them. I might go into education.

It [writing] was always something I did for assignments and free time, if I had a cool idea. But when I started winning the awards, that’s when I knew I had a talent. The first draft of Talia at least five versions. And even now we are still making edits to the script. It has been really awesome to see the hard work and progression that the piece has made.

Mr. Mitchell has been really helpful with editing. We would go back and forth until we got to this place. There are several large chunks and many characters did not make the final cut. But all edits are for the best.

What was the biggest challenge for you during this process?

The hardest thing for me during this process was figuring out how the characters [would] speak in silence. There are a lot of things we want to say to each other on a daily basis, but we choose not to. And it’s very easy to write characters screaming at each other and insulting each other. But how do you write silence? Expression? I did a lot of stage directions for puppetry because it’s full of puppets. But I didn’t choose as much stage direction for the actors because mostly I wanted to see how others would interpret it; I wanted to see how they [the actors] would fill these gaps and silences and nothings. The actors choose. They get to see how long they think this silence needs to last. Every single performance is different and that is super-exciting!

This play will live on and continue to be reinterpreted over and over again, with each new set of performers on stage. It was part intention and part “blessing from the writing gods.” It is a gift. It is magic. People need to see it.

What would you say to younger students who have writing talent?

Don’t stop writing! It sounds very cheesy. Writing can be incredibly hard because some days, it’s like, “I don’t feel like doing that,” or “I will do that later.” Just continue writing. It is work! But after polishing it over again and again and again, you will eventually get a diamond out of coal. If you put that pressure on it, it will become something beautiful. It takes time and patience, which is something that I definitely developed over the pandemic when I was writing this play.

Last chance to see it:

The KidsWrite performance will be livestreamed on May 27 & 28th through the Burning Coal Theatre Co, Inc. of Raleigh.